Genesis 15:7-21
7And he said to him, “I am the Lord who brought you out from Ur of the Chaldeans to give you this land to possess.”
8But he said, “O Lord God, how am I to know that I shall possess it?”
9He said to him, “Bring me a heifer three years old, a female goat three years old, a ram three years old, a turtledove, and a young pigeon.”
10And he brought him all these, cut them in half, and laid each half over against the other. But he did not cut the birds in half.
11And when birds of prey came down on the carcasses, Abram drove them away.
12As the sun was going down, a deep sleep fell on Abram. And behold, dreadful and great darkness fell upon him.
13Then the Lord said to Abram, “Know for certain that your offspring will be sojourners in a land that is not theirs and will be servants there, and they will be afflicted for four hundred years.
14But I will bring judgment on the nation that they serve, and afterward they shall come out with great possessions.
15As for you, you shall go to your fathers in peace; you shall be buried in a good old age.
16And they shall come back here in the fourth generation, for the iniquity of the Amorites is not yet complete.”
17When the sun had gone down and it was dark, behold, a smoking fire pot and a flaming torch passed between these pieces.
18On that day the Lord made a covenant with Abram, saying, “To your offspring I give this land, from the river of Egypt to the great river, the river Euphrates,
19the land of the Kenites, the Kenizzites, the Kadmonites,
20the Hittites, the Perizzites, the Rephaim,
21the Amorites, the Canaanites, the Girgashites and the Jebusites.”

Cliff and I have only purchased one house together during our marriage. Ten years ago, we moved from the parsonage into a condo. When it came time to close on the house, we went to a special place and had to sign a whole stack of papers. We were entered into a serious contract with the money lenders. During the last few years in America, the housing market has crashed out and we have witnessed thousands of people who walked away from the commitment they made when they signed all those papers. They lost their jobs or faced other reversals that kept them from fulfilling their promises to the money lenders. The contracts were broken. Other than not having that house anymore, I’m not sure if there are further consequences for breaking the loan agreement. I can only assume there are. In our reading for today, we find Abram and God committing to a contract or a covenant. This is another one of those pivotal moments in Abram’s relationship with God. 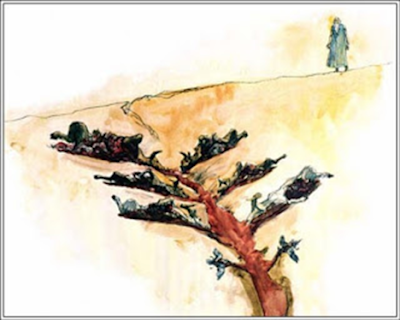 At that time, when two parties wanted to enter into a contract or covenant, they would participate in the ritual in which God engages Abram. The animals listed in the text are brought together, with the larger animals being cut in half. The halves are places across from one another, creating a “river” of blood between the two sides. The two parties of the covenant would then walk through the blood. This would signify that they were committed to the terms of the agreement and were willing to have their own blood shed should they break the agreement. This practice would not have been foreign to Abram and he understood the importance of the promise he expected to make. But if you read the account carefully, you will see that Abram never has to make the walk through the blood. He is put into a deep sleep by God and God alone makes the pass through the blood in the form of fire and smoke. God’s grace once again becomes evident. He does not ask Abram to make a promise that he cannot keep. God is the One who makes the promise and God is the One who will keep both sides of the covenant. God is the giver and Abram is the recipient on every level. Jesus arrives a few thousand years later and allows His blood to be shed because the covenant was indeed broken – by Abram’s descendants. So while the covenant of obedience is broken by us every day, the blood price is paid by Jesus.

On a side note, this is covenant is very similar to the covenant formed between God and Moses on Mt. Sinai in many ways. God passes before the people in fire and smoke. He makes a covenant with Moses (and so the people) and yet is the One who keeps both sides of the agreement, since we are unable to keep up our side of the deal. While God has made this incredible promise to Abram, we will see in the very next chapter how Abram creates a massive problem by trying to take things into his own hands. The stories never change, just the name of the characters. (Insert your name here.)