Matthew 14:22-33
22Immediately he made the disciples get into the boat and go before him to the other side, while he dismissed the crowds.
23And after he had dismissed the crowds, he went up on the mountain by himself to pray. When evening came, he was there alone,
24but the boat by this time was a long way from the land, beaten by the waves, for the wind was against them.
25And in the fourth watch of the night he came to them, walking on the sea.
26But when the disciples saw him walking on the sea, they were terrified, and said, “It is a ghost!” and they cried out in fear.
27But immediately Jesus spoke to them, saying, “Take heart; it is I. Do not be afraid.”
28And Peter answered him, “Lord, if it is you, command me to come to you on the water.”
29He said, “Come.” So Peter got out of the boat and walked on the water and came to Jesus.
30But when he saw the wind, he was afraid, and beginning to sink he cried out, “Lord, save me.”
31Jesus immediately reached out his hand and took hold of him, saying to him, “O you of little faith, why did you doubt?”
32And when they got into the boat, the wind ceased.
33And those in the boat worshiped him, saying, “Truly you are the Son of God.”

When my husband, Cliff was in the seminary, he had a classmate who was from Africa. This man was a studying for the ministry so that he could go back to Africa and share the Word with his people. The seminary in question is located in Fort Wayne, Indiana and has at its center a small lake (or large pond). Obviously, this lake freezes over in the winter, prompting this man from Africa to write home to his family that his faith was growing so much from his studies that he was actually able to walk on water. Eventually he shared with his family that the lake had been frozen at the time of this “miracle.” In our famous story for today we find a man wanting to walk on water, but it certainly was not frozen!

Our story begins with Jesus taking a few moments to be alone with the Father. He has taught His Disciples through parables. He has healed countless people. He has fed well over 5,000 people a good dinner and now He wants a few moments to mediate and commune with His Father. He sends the Disciples out across the lake ahead of Him, promising to catch up with them and then dismisses the crowd. The scene shifts to Jesus “catching up” with the disciples who are struggling against the wind out on the lake. They don’t appear to be in danger or particularly afraid of the weather. They are just working hard to keep the boat moving the direction they desire. Then, between 3am and 6am, Jesus comes to them on the water, strolling along on top of the waves. The first response of the disciples seems rather odd – they assume it’s a ghost and are afraid. After all they had heard Jesus say and seen Jesus do, it seems strange that this group of guys first thought would be ghost rather than “It’s Jesus!” But this is their response. Then Peter behaves in a manner that seems rather strange as well. He wants to walk on water too, if it’s really Jesus. And walk on the water he does – for a time. Then he looks around and realizes the waves are high and his faith is short. He begins to sink into the water. Jesus takes his hand and pulls him to safety. But while Jesus pulls him back to the surface of the water, He asks Peter why he doubted and calls him “Little Faith.” Peter isn’t a hero. He’s impulsive and foolish. 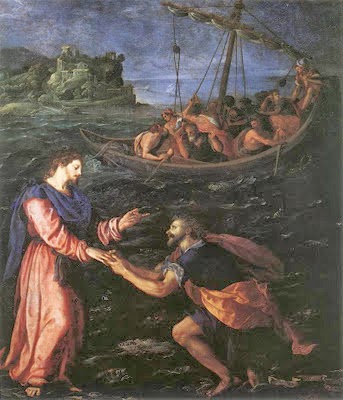 But –Peter is saved. Even though Peter doubts, Jesus is able to affect his rescue. Peter’s faith is shown to be small; Jesus’ love and power are shown to be great. The Disciples rightly fall at Jesus feet and worship Him as their realization of the truth of His identity continues to grow. He is their awesome God who has power over all things.

Doubt is a constant companion for most who walk in the faith. Sometimes there just seems to be no logical explanation for what happens and we look to God as wonder if He’s actually in control. The Scriptures are replete with examples of people who doubted God’s ability to take care of them. But our doubt does not control God’s power. Even though Peter doubts, Jesus is still able to save him. Even though we doubt, God is still able to save us. Peter got into trouble when he took his eyes off of Jesus and focused on the waves. When the water seems to be lapping up around your knees, perhaps it’s time to change focus and look up instead.