18He said therefore, “What is the kingdom of God like? And to what shall I compare it? 19It is like a grain of mustard seed that a man took and sowed in his garden, and it grew and became a tree, and the birds of the air made nests in its branches.” 20And again he said, “To what shall I compare the kingdom of God? 21It is like leaven that a woman took and hid in three measures of flour, until it was all leavened."

When my oldest daughter was only 2, she was engaged by my husband in the planting of the spring peas. Cliff gave her a handful of pea seeds (shriveled peas) and then had her drop a seed into the small holes he punched in the ground with a stick. I can still see her in my mind’s eye squatted on her haunches as only a small child can do, dropping those peas into the holes. Then together they would cover them with dirt. Cliff promised her that a plant would come out of the ground and grow peas for her to eat. She was doubtful but willing to see what would happen. Sure enough, a few weeks later, there were the pea plants, which soon flowered and produced peas. Since she believed those peas to be “hers”, she went out to the garden every evening to see what had been produced and then proceeded to eat them standing right there in the garden. Not a single pea made it into the house. But she got a great lesson in something small producing something great.

Jesus uses an object lesson pulled right from the agrarian culture in which He was living; the mustard seed. This is a very tiny seed but it has an incredible impact when planted and it usually isn’t considered desirable. And mustard plants are just that, plants – not trees. They are considered a weed. They spread perniciously and will take over an entire field if given the opportunity. So when Jesus suggests that a farmer would sow mustard seeds, the people are thinking “not very likely!” But His kingdom is very much like a mustard seeds for it has the God given ability to spread. His Kingdom provides shelter and security for all who would rest in His branches. Something that started in such a tiny way, like a mustard seed, has spread to be a global force today, as it has been for centuries now. In this parable we also find a bit of a warning from Jesus for those who would see His Kingdom stopped. Have you ever tried to rid your garden of a weed? It’s really difficult, especially if you don’t have chemical deterrents. 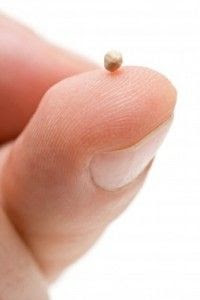 Also lurking beneath the surface of these parables is the hidden process, a mystery, beyond human ken. In neither parable does the human observer cause the growth. That work belongs solely by God through the power of the Holy Spirit. Just as we cannot see the leaven working through the flour, so too, we cannot see what happens in the heart of the new believer. That faith grows in miraculous ways that only God can cause; we but the observers who marvel at what He has done.