The Beginning of the End

Luke 21:5-19
5And while some were speaking of the temple, how it was adorned with noble stones and offerings, he said, 6“As for these things that you see, the days will come when there will not be left here one stone upon another that will not be thrown down.”

These two verses mark the beginning of Jesus final discourse as recorded Luke. Now He will discuss the End of all things and of course, He is handed the perfect object lesson as the Disciples talk about the beauty of the Temple. This particular conversation probably takes place after they had left the Temple and were looking down upon it from the vantage point of the Mount of Olives. The Temple was indeed a magnificent building at the time of Jesus.

After the Babylonian exile, the Jerusalem temple was rebuilt ca. 536–16 b.c. Those observers who were old enough to remember the first temple wept because the first temple far surpassed the second in terms of majesty and glory (Ezra 3:12). The second temple period was an era of “small things” (Zechariah 4:10). However, the precincts of the second temple were renovated from 20bc to ad64. Most significant work was done early in this period under Herod the Great. Some of the huge white stones provided for the foundation may still be seen at the bottom of the Wailing Wall.
Just, A. A., Jr. (1997). Luke 9:51–24:53 (p. 783). St. Louis: CPH. 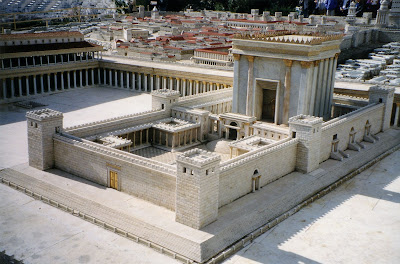 What the Disciples do not know that Jesus begins to explain is that this structure made by human hands is incredibly temporary. It will be gone within the next few decades. While Jesus does not give them an exact date, as that is unnecessary, He does foretell the Temple’s destruction. What we know is that He was completely correct as we look back through history. In ad70 the Temple is completely destroyed by the Romans. The gold from the dome melts in the heat of the fire that consumes the building and this prompts the people to chip those fallen stones apart to get to the gold. Indeed, not one stone is left upon another. 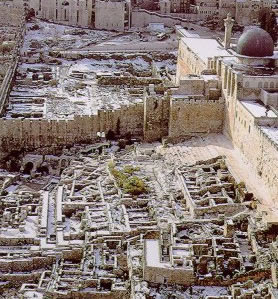 Indirectly, Jesus announces a shift in the locale of God’s presence—from the physical temple in Jerusalem to the fleshly body of Jesus. In a sense, the temple is rendered obsolete by Jesus’ incarnation. The Temple is no longer necessary and after His death the daily sacrifices that took place in that Temple were also no longer necessary for His death is the final sacrifice, once and for all. You and I are included in that “once and for all.” His death covered our sins. We no longer need to make sacrifice for our wrongs and we are forgiven. The Temple is now just an archeological site.