1 Peter 4:12-19
12Beloved, do not be surprised at the fiery trial when it comes upon you to test you, as though something strange were happening to you. 13But rejoice insofar as you share Christ’s sufferings, that you may also rejoice and be glad when his glory is revealed. 14If you are insulted for the name of Christ, you are blessed, because the Spirit of glory and of God rests upon you. 15But let none of you suffer as a murderer or a thief or an evildoer or as a meddler. 16Yet if anyone suffers as a Christian, let him not be ashamed, but let him glorify God in that name. 17For it is time for judgment to begin at the household of God; and if it begins with us, what will be the outcome for those who do not obey the gospel of God? 18And “If the righteous is scarcely saved,what will become of the ungodly and the sinner?” 19Therefore let those who suffer according to God’s will entrust their souls to a faithful Creator while doing good. 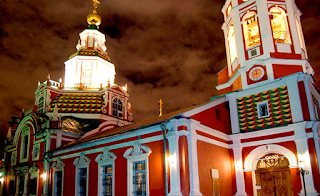 In January of 1978, I was privileged to travel to Russia for a history class. The professor who led the trip was an amazing individual who loved Russian history and taught us more in those 6 weeks than I thought would be possible. At that time, Russia was still a communist country and held onto the memories of the “glorious revelation”. We were not allowed to take pictures at most locations, could not take the money out of the country (we had to account for every penny we had in every currency in our pocket), and we were closely monitored all of the time. We couldn’t “gift” anyone with jeans (a prized commodity) or coats. (I had a white winter coat I wore for most of the trip and was offered a great deal of money for it on several occasions.) A large part of our tourism was to visit dozens of ancient cathedrals and churches, which, according to our guide, had been “reclaimed for the people during the revolution” and turned into museums, or in one case in what was then known as Leningrad (now St. Petersburg), a public swimming pool. (I remember being absolutely appalled when we went to visit St. Peter and St. Paul and saw people swimming in what would have been the Sanctuary.)

In 1929 Joseph Stalin began a decade of terror for the church, intending to destroy it. Ninety-two percent of the church buildings were closed and either destroyed or converted into museums, warehouses, or factories. All but one of the seminaries were closed. The number of priests was reduced by 95 percent; tens of thousands disappeared into the gulags.
Jeske, M. A. ©2002. James, Peter, John, Jude (p. 124). Milwaukee, WI: Northwestern Pub. House.

As I read through these verses this morning, memories of that trip came up fast. Those “museums” still bore the marks of the sacred. The people may have been driven away by hatred, but building still bore the imprint of the worship that had taken place in them for centuries before they were “liberated” by the revolution.

Of course, Peter is talking about straight-up persecution and in thousands of cases, the martyrdom of God’s people. Peter pulls no punches here – living as a Christian may mean torture and death. The last 2,000 years of history have proven his words to be prophetic as well as pertinent to his own time. Frankly, we have it easy by comparison to what our faith-filled ancestors have suffered – at least in the U.S. While we live in an increasingly hostile environment when it comes to the faith, we are still legally allowed to practice our faith and live it out freely. That may change, but for the moment, we’re okay. That is not true globally, as there are millions who do not live with these freedoms and must practice the faith underground – and they do so! When we take that freedom for granted, we are doing a disservice to those who have gone before us.

Peter also calls us to a high standard of moral living. If you suffer because you are a thief or a murderer, well, you’ve lost your witness. If you are suffering the consequences of sinful choices, you cannot say you are suffering for the Lord. That seems fairly straight forward.

Jesus made many paradoxical statements like “The last shall be first” in order to teach God’s ways. In these verses Peter adds a few of his own “upside down” statements, such as “you are blessed if you are insulted because of the name of Christ” and “if you suffer as a Christian, praise God!” How could he possibly say those outrageous things?
•  He says them so that you may be overjoyed when Christ’s glory is revealed, in other words, so that you keep your eyes on the prize and not be distracted with temporary trash.
•  The Spirit of glory and of God rests on you—you need that a lot more than you need approval and compliments from God’s enemies.
•  God will take care of those enemies soon. If even the children of God must pass through the dreadful day of judgment, what will it be like for unbelievers? Horrible! Don’t envy their “freedom” from restraint.
Jeske, M. A. ©2002). James, Peter, John, Jude (p. 125). Milwaukee, WI: Northwestern Pub. House.

No sane person signs up for suffering. But it happens in every life. Longfellow coined the phrase “Into every life a little rain must fall.” But for the Christian, suffering for your faith is a unique experience (although the Jews know a great deal about this as well.) I’ve had people laugh in my face because of my faith and while it bothered me as child, I don’t really pay much attention any more. But if that’s the worst I ever experience, I’ve had an easy life.