12And Jonathan said to David, “The Lord, the God of Israel, be witness! When I have sounded out my father, about this time tomorrow, or the third day, behold, if he is well disposed toward David, shall I not then send and disclose it to you? 13But should it please my father to do you harm, the Lord do so to Jonathan and more also if I do not disclose it to you and send you away, that you may go in safety. May the Lord be with you, as he has been with my father. 14If I am still alive, show me the steadfast love of the Lord, that I may not die; 15and do not cut off your steadfast love from my house forever, when the Lord cuts off every one of the enemies of David from the face of the earth.” 16And Jonathan made a covenant with the house of David, saying, “May the Lord take vengeance on David’s enemies.” 17And Jonathan made David swear again by his love for him, for he loved him as he loved his own soul. 18Then Jonathan said to him, “Tomorrow is the new moon, and you will be missed, because your seat will be empty. 19On the third day go down quickly to the place where you hid yourself when the matter was in hand, and remain beside the stone heap. 20And I will shoot three arrows to the side of it, as though I shot at a mark. 21And behold, I will send the boy, saying, ‘Go, find the arrows.’ If I say to the boy, ‘Look, the arrows are on this side of you, take them,’ then you are to come, for, as the Lord lives, it is safe for you and there is no danger. 22But if I say to the youth, ‘Look, the arrows are beyond you,’ then go, for the Lord has sent you away. 23And as for the matter of which you and I have spoken, behold, the Lord is between you and me forever.” 24aSo David hid himself in the field.

As we discussed yesterday, it is clear that Jonathan doesn’t want to believe his father has murderous intentions toward David. But his confidence is being shaken as he holds onto that lie. Because of his doubts about Saul, he sets up a plan with David to confirm what David already knows – Saul wants to kill him, with his own hands if necessary. This whole scenario seems a bit odd, but in truth it is the way of espionage – and treason. If Jonathan is found out, he will be executed, for he is aiding a man Saul wants dead. Thus the plan to transmit information to David without alerting Jonathan’s servant. Jonathan develops a secret code. 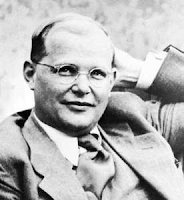 The history of Christianity is filled with stories of people who went against their own governments to achieve the purposes of God. And many of them has suffered tremendously because of it. Two people come to mind immediately; Corrie Ten Boom and Dietrich Bonhoeffer. Both were the victims of Hitler’s murderous rampage through Europe during WWII. Both were imprisoned and Bonhoeffer lost his life on the gallows three weeks before the end of the war. Corrie suffered the terrors of the concentration camps but emerged with a message of forgiveness and grace. Both remained faithful to the message of the Gospel until the end of their lives. Treason isn’t always the wrong thing to do.

Jonathan risks treason but he is completely committed to the truth. Because of that commitment, we find him taking precautions for his family, but asking David to protect them. He knows he is putting his life in danger and that David has the strength and power to protect those Jonathan loves. He is facing reality. His decisions are dangerous but necessary. What we are seeing is that Jonathan is first and foremost committed to the plans and will of God. Again, so admirable.

I don’t think we are often asked to make these kinds of tough decisions today. In almost every regard, we have it easy and for that we thank God. He has blessed us with peace and freedom to worship God. That isn’t true globally, but most definitely true in the U.S., for now. To God be the glory.