Discernment Can Be Tricky 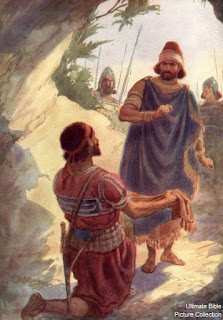 1When Saul returned from following the Philistines, he was told, “Behold, David is in the wilderness of Engedi.” 2Then Saul took three thousand chosen men out of all Israel and went to seek David and his men in front of the Wildgoats’ Rocks. 3And he came to the sheepfolds by the way, where there was a cave, and Saul went in to relieve himself. Now David and his men were sitting in the innermost parts of the cave. 4And the men of David said to him, “Here is the day of which the Lord said to you, ‘Behold, I will give your enemy into your hand, and you shall do to him as it shall seem good to you.’ ” Then David arose and stealthily cut off a corner of Saul’s robe. 5And afterward David’s heart struck him, because he had cut off a corner of Saul’s robe. 6He said to his men, “The Lord forbid that I should do this thing to my lord, the Lord’s anointed, to put out my hand against him, seeing he is the Lord’s anointed.” 7So David persuaded his men with these words and did not permit them to attack Saul. And Saul rose up and left the cave and went on his way. 8Afterward David also arose and went out of the cave, and called after Saul, “My lord the king!” And when Saul looked behind him, David bowed with his face to the earth and paid homage. 9And David said to Saul, “Why do you listen to the words of men who say, ‘Behold, David seeks your harm’? 10Behold, this day your eyes have seen how the Lord gave you today into my hand in the cave. And some told me to kill you, but I spared you. I said, ‘I will not put out my hand against my lord, for he is the Lord’s anointed.’ 11See, my father, see the corner of your robe in my hand. For by the fact that I cut off the corner of your robe and did not kill you, you may know and see that there is no wrong or treason in my hands. I have not sinned against you, though you hunt my life to take it. 12May the Lord judge between me and you, may the Lord avenge me against you, but my hand shall not be against you. 13As the proverb of the ancients says, ‘Out of the wicked comes wickedness.’ But my hand shall not be against you. 14After whom has the king of Israel come out? After whom do you pursue? After a dead dog! After a flea! 15May the Lord therefore be judge and give sentence between me and you, and see to it and plead my cause and deliver me from your hand.” 16As soon as David had finished speaking these words to Saul, Saul said, “Is this your voice, my son David?” And Saul lifted up his voice and wept. 17He said to David, “You are more righteous than I, for you have repaid me good, whereas I have repaid you evil. 18And you have declared this day how you have dealt well with me, in that you did not kill me when the Lord put me into your hands. 19For if a man finds his enemy, will he let him go away safe? So may the Lord reward you with good for what you have done to me this day. 20And now, behold, I know that you shall surely be king, and that the kingdom of Israel shall be established in your hand. 21Swear to me therefore by the Lord that you will not cut off my offspring after me, and that you will not destroy my name out of my father’s house.” 22And David swore this to Saul. Then Saul went home, but David and his men went up to the stronghold.

This was always one of my favorite stories about David when I was growing up as it was shared with me in Sunday School. It was told often, and David was the hero, because of his surprising choice for mercy rather than revenge. But now, decades later, I see the story much differently.

As I was pondering this well-worn story, asking God for a fresh insight, the word discernment sprang to mind. Here in this incident, we find David exercising great discernment. His comrades saw an open door to the throne. David did not see the same thing; well, he probably saw it but he didn't take it. We are given a window into his thought process and it is instructive.

While David outright denies the opportunity to kill Saul, he does snip off a corner of his robe. But even in doing this, His conscience is stricken, and he is filled with regret. Even that simple, and seemingly harmless gesture, strikes him as disrespectful as soon as he’s done it. While he may not respect Saul as a man, he has endless regard for him as God’s chosen leader. This understanding alone places David in the hall of fame. Regardless of Saul’s numerous attempts on his life, David still sees Saul as God’s anointed. This is indeed honorable. He places God’s command (the 4th Commandment) to honor those in authority over us into his decision-making process, and chooses obedience.

For me, the most striking phrase in this whole passage is that David “paid homage” to Saul! He actually got on the ground and bowed before the king. This is stunning. David approaches Saul with humility rather than rancor. This action alone puts David in a different category. How many of us have the humility to bow before an enemy? I don’t think I do. Yes, David makes his point with Saul, but he does so without revenge or anger. And while his own men thought he was wasting a great opportunity to do away with his enemy, they had to take a lesson from his godly response to this chance. Instead of revenge, David chooses mercy. That choice took discernment.

For me, the lesson is that perhaps I need to take a moment in difficult (or maybe all!) situations. The obvious path may not be the godly one. David has shown us here how to take a moment and factor in all that God says to us about living with and for Him. Discerning His direction may not always be obvious, but it is always available.