13Then the sixth angel blew his trumpet, and I heard a voice from the four horns of the golden altar before God,
14saying to the sixth angel who had the trumpet, “Release the four angels who are bound at the great river Euphrates.”
15So the four angels, who had been prepared for the hour, the day, the month, and the year, were released to kill a third of mankind.
16The number of mounted troops was twice ten thousand times ten thousand; I heard their number.
17And this is how I saw the horses in my vision and those who rode them: they wore breastplates the color of fire and of sapphire and of sulfur, and the heads of the horses were like lions’ heads, and fire and smoke and sulfur came out of their mouths.
18By these three plagues a third of mankind was killed, by the fire and smoke and sulfur coming out of their mouths.
19For the power of the horses is in their mouths and in their tails, for their tails are like serpents with heads, and by means of them they wound.
20The rest of mankind, who were not killed by these plagues, did not repent of the works of their hands nor give up worshiping demons and idols of gold and silver and bronze and stone and wood, which cannot see or hear or walk,
21nor did they repent of their murders or their sorceries or their sexual immorality or their thefts.

Yesterday we read of the locust/scorpions that were released upon the earth to torture those who reject Christ as Savior. Now we read of the sixth trumpet angel and the releasing of fierce warrior creatures who kill indiscriminately, taking a third of the world population. 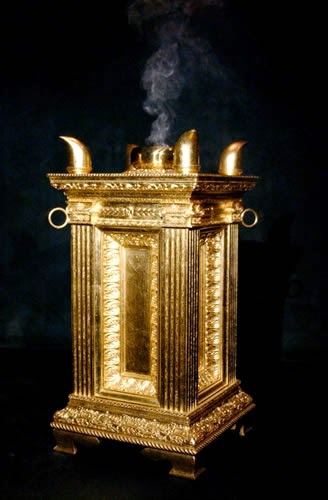 “A voice” emerges from heaven, originating at the horns (the point of power) of the incense altar. As we read in chapter 6, located under that altar are the saints who have passed into God’s presence ahead of us. This “voice” could be either the angel of the incense altar or the saints themselves – or even a combination of the two. The voice instructs the trumpet angel to release the four angels who have held back the terrible work of these creatures that bring death in their wake and after they bring death, torture for those who remain follows. The destruction brought by these creatures does not cover all of the time period between Christ’s ascension and His second coming. They are limited to a finite amount of time toward the very end, immediately before the Second Coming of Christ.

This horde from hell is mounted on horseback, covered in armor, with teeth like lions and tails bearing the heads of snakes. The lions' teeth kill and the snakes torture. These are hideous demons sent to inflict enough pain and suffering in the world so as to bring people into an awareness of their need for God. But instead of turning toward God, those who partake in the idolatrous worship of the demonic will not repent. They will remain steadfast in their determination to forge ahead on their own.

Once again, this is a spiritual attack, not a literal one. But also bear in mind that a spiritual attack is far worse than a physical one. Spiritual suffering is terrible but also self-imposed. Where repentance is found, spiritual peace endures. As I read this passage, a question comes to mind. (And I hate to bring it up, because I don’t have an answer. If you know me, you know not having an answer is a problem!) The question is: if this is a spiritual attack and not a physical one, are the deaths spiritual rather than physical? A spiritual death is far worse because it is eternal. A physical death is certainly not a good thing, but it may usher you right into the presence of God, if you are a believer. So – I suppose I am inclined to lean more toward these being spiritual deaths. I would be interested in hearing your thoughts on that one.

Regardless of your stance on the question we still can take complete comfort in the fact that Jesus remains our protection against all that would stand between us and God. Even should we die, we are safe in His arms and eternity with Him is assured in His blood. When reading these terrifying passages we must at all times rely on that truth.