Do You Want to Go Away?

John 6:60-71
60When many of his disciples heard it, they said, “This is a hard saying; who can listen to it?” 61But Jesus, knowing in himself that his disciples were grumbling about this, said to them, “Do you take offense at this? 62Then what if you were to see the Son of Man ascending to where he was before? 63It is the Spirit who gives life; the flesh is no help at all. The words that I have spoken to you are spirit and life. 64But there are some of you who do not believe.” (For Jesus knew from the beginning who those were who did not believe, and who it was who would betray him.) 65And he said, “This is why I told you that no one can come to me unless it is granted him by the Father.” 66After this many of his disciples turned back and no longer walked with him. 67So Jesus said to the Twelve, “Do you want to go away as well?” 68Simon Peter answered him, “Lord, to whom shall we go? You have the words of eternal life, 69and we have believed, and have come to know, that you are the Holy One of God.” 70Jesus answered them, “Did I not choose you, the Twelve? And yet one of you is a devil.” 71He spoke of Judas the son of Simon Iscariot, for he, one of the Twelve, was going to betray him. 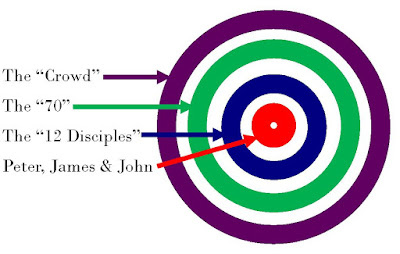 As we have read in the last couple of chapters, Jesus is surrounded by people. They have come to see the miracle worker do His thing. By this point He, has different levels of people walking with Him and all for different reasons. First there is “The Crowd”. These are the people who have great needs, like physical healing or food. They are following Jesus because He is a miracle man. But, they are also hearing His message and I assume there are sincere believers in the crowd.

Next is what is known as “The 70”. This group is made up of those who are probably fairly faith-filled believers. Here you will find the women who are following Jesus with real faith (probably included Jesus’ mother, some of the women who had been healed, women who supported Jesus’ ministry with financial help, food, and the stuff of life.) This could also possibly include people like Nicodemus.

Closer still to Jesus would be “The 12 Disciples”. We know these guys. They were handpicked by Jesus to follow Him and learn so that they could spread His message after His death and resurrection. Included in this group are the three guys who seems to walk closest to Him and were included at events that the other 9 disciples did not witness such as the Transfiguration and a couple of healings. If you want to really get down to picky details, there are many scholars who would place John closes to Jesus as a “best friend.”

In our reading for today, we see that Jesus’ last teaching about His role as the Bread of Life and Living Water has turned people off. They don’t understand what He is talking about and they are really rather disturbed by what He’s teaching so they begin to wander back home. Maybe this guy isn’t what we’re looking for after all. And they were correct about that assumption. They wanted someone who would fill their bellies and free them from the Romans. He was looking for faithful people who longed to be a part of the Kingdom of God, who would commit their entire lives to Him.

The central verse for me today is “Do you want to go away as well?” Quite often we have to admit that we are disappointed with God’s choices for us. He doesn’t perform the way we want Him to and the temptation to walk away can become overwhelming. Why doesn’t God just give me what I want? Why doesn’t God see things my way? Happens to me all the time. Most days I’m not tempted to just wander away, but maybe I do grow a little distant. Here’s where we have to do that which is counter intuitive for us. When God doesn’t perform the way we want Him to, perhaps that is when we press in a little closer. Perhaps that is when we stop demanding and start listening. That is when we place our head upon His chest and just breathe.