Of David, when he changed his behavior before Achish, so that he drove him out, and he went away.
1I will bless the Lord at all times; His praise shall continually be in my mouth.
2My soul makes its boast in the Lord; let the humble hear and be glad.
3Oh, magnify the Lord with me, and let us exalt his name together!
4I sought the Lord, and He answered me and delivered me from all my fears.
5Those who look to Him are radiant, and their faces shall never be ashamed.
6This poor man cried, and the Lord heard him and saved him out of all his troubles.
7The angel of the Lord encamps around those who fear Him, and delivers them.
8Oh, taste and see that the Lord is good! Blessed is the man who takes refuge in Him!
9Oh, fear the Lord, you His saints, for those who fear Him have no lack!
10The young lions suffer want and hunger; but those who seek the Lord lack no good thing.
11Come, O children, listen to me; I will teach you the fear of the Lord.
12What man is there who desires life and loves many days, that he may see good?
13Keep your tongue from evil and your lips from speaking deceit.
14Turn away from evil and do good; seek peace and pursue it.
15The eyes of the Lord are toward the righteous and His ears toward their cry.
16The face of the Lord is against those who do evil, to cut off the memory of them from the earth.
17When the righteous cry for help, the Lord hears and delivers them out of all their troubles.
18The Lord is near to the brokenhearted and saves the crushed in spirit.
19Many are the afflictions of the righteous, but the Lord delivers him out of them all.
20He keeps all his bones; not one of them is broken.
21Affliction will slay the wicked, and those who hate the righteous will be condemned.
22The Lord redeems the life of His servants; none of those who take refuge in Him will be condemned. 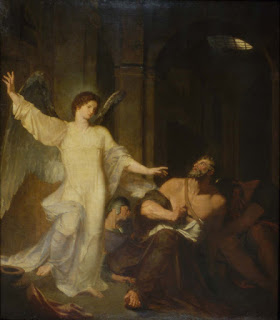 Caption – The Angel of the Lord releases Peter from Prison


Sometimes these posts take a long time to write because I get caught up in the study of it all. And I can’t seem to stop myself from rereading the passage over and over. Such is the way of my devotional time today. This Psalm begs to be read, reread, and read again. So I did. The verses that popped out over those many times through are in color. Wish I could have drawn pictures around them too!


This Psalm is accredited to David and was apparently written at a tough time in his life. The writing of these words was prompted by his flight from King Saul who was trying to kill him. Instead of seeking protection from God, David flees to Philistia (home of the now deceased Goliath) to find refuge with the enemies of Israel; not David’s best idea. Of course the king of Philistia, King Achish does not trust this Israelite and David has to take drastic action. He feigns insanity.


10And David rose and fled that day from Saul and went to Achish the king of Gath. 11And the servants of Achish said to him, “Is not this David the king of the land? Did they not sing to one another of him in dances, ‘Saul has struck down his thousands, and David his ten thousands’?” 12And David took these words to heart and was much afraid of Achish the king of Gath. 13So he changed his behavior before them and pretended to be insane in their hands and made marks [literally- urinated] on the doors of the gate and let his spittle run down his beard. 14Then Achish said to his servants, “Behold, you see the man is mad. Why then have you brought him to me? 15Do I lack madmen, that you have brought this fellow to behave as a madman in my presence? Shall this fellow come into my house?”


Achish didn’t see anything to fear in a madman and had David sent away. Because of this incident, David realizes he has made a mistake in turning to his enemies for protection and instead turns to God as he should have done in the first place. My mind also wandered to another story that strikes a chord in terms of the angels encamped around our lives. In this story, Elisha and his servant are surrounded by enemy soldiers. Their lives are certainly forfeit if the situation is regarded through human eyes only. But Elisha prays that his servant’s spiritual eyes would be opened and he is treated to the vision of a heavenly army surrounding and protecting them.


15When the servant of the man of God rose early in the morning and went out, behold, an army with horses and chariots was all around the city. And the servant said, “Alas, my master! What shall we do?” 16He said, “Do not be afraid, for those who are with us are more than those who are with them.” 17Then Elisha prayed and said, “O Lord, please open his eyes that he may see.” So the Lord opened the eyes of the young man, and he saw, and behold, the mountain was full of horses and chariots of fire all around Elisha.


Of course Elisha and his servant are spared by the hand of God. What a sight that must have been. You'll have to read the rest of the story for yourself. Would that our spiritual eyes too are opened to the mighty power of God’s angels working on our behalf. Life’s terrors would subside considerably!


Finally I have to make mention of “taste and see that the Lord is good!” The love of God is something to be experienced for ourselves. I cannot taste anything for you. I might be able to describe it – to a small extent. But the only way for you to know how something tastes if for you to put it in your own mouth. The goodness, protection, and love of the Lord are personal. Jewish fathers would put honey on the lips of their children when they read the Word so that the children would remember that the Lord is sweet and His Word is worth remembering. We all have to taste it for ourselves.


Go back and read the Psalm again (and maybe again) and taste the Words for yourself. You will find your own sweet spots to enjoy and experience. Take time to remember those moments when the angels of the Lord were encamped around you and provided the protection that only they can bring from God’s hand.