1In the meantime, when so many thousands of the people had gathered together that they were trampling one another, he began to say to his disciples first, “Beware of the leaven of the Pharisees, which is hypocrisy. 2Nothing is covered up that will not be revealed, or hidden that will not be known. 3Therefore whatever you have said in the dark shall be heard in the light, and what you have whispered in private rooms shall be proclaimed on the housetops. 4I tell you, my friends, do not fear those who kill the body, and after that have nothing more that they can do. 5But I will warn you whom to fear: fear him who, after he has killed, has authority to cast into hell. Yes, I tell you, fear him! 6Are not five sparrows sold for two pennies? And not one of them is forgotten before God. 7Why, even the hairs of your head are all numbered. Fear not; you are of more value than many sparrows. 8And I tell you, everyone who acknowledges me before men, the Son of Man also will acknowledge before the angels of God, 9but the one who denies me before men will be denied before the angels of God. 10And everyone who speaks a word against the Son of Man will be forgiven, but the one who blasphemes against the Holy Spirit will not be forgiven. 11And when they bring you before the synagogues and the rulers and the authorities, do not be anxious about how you should defend yourself or what you should say, 12for the Holy Spirit will teach you in that very hour what you ought to say.”

Luke presents two huge topic for consideration in this passage; blasphemy and hypocrisy. And throughout the last 2,000 years, believers have sometimes questioned their own faith because of a fear of both. Let’s deal with the easy one first – hypocrisy. The term hypocrite came from the world of Greek drama. It was used to describe the masks that the players used to dramatize certain roles. Even today, the theatre is symbolized by the twin masks of comedy and tragedy. In antiquity, certain players played more than one role, and they indicated their role by holding a mask in front of their face. That’s the origin of the concept of hypocrisy. 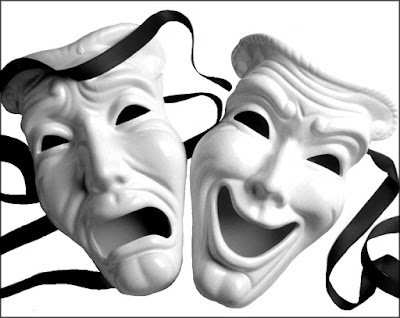 The charge of “hypocrite” was often lobbed at the Pharisees by Jesus. Hypocrisy is insidious and hugely influential. Most of the time you may not even know you are held within its claws. It has the power to slowly and subtly erode your faith until there’s nothing left. You’re “good person” mask is held firmly in place by your own pride and your faith just drips away. You stand as your own judge and jury. You claim to rise to at least your own standards and fail at even that. This is hypocrisy. Our self-righteousness is simply a cover up for our own wickedness. Hypocrisy threatens our eternal lives because it is filled with delusion. Belief in yourself and your good works for salvation is the road to destruction.

Blasphemy is a little slipperier. There are those who teach that once you blaspheme, that’s it. You’re out of God’s Kingdom forever. I’m not quite sure that’s what the Scripture is teaching here. Blaspheme is to curse the name of God and deny Him from coming into your life. In the Old Testament, the blasphemer was immediately stoned to death and I could see how one might assume that meant eternal damnation. That wouldn’t leave much room for repentance. But in the New Testament, we see prominent people (specifically Saul [Pau] and Peter) who make drastic mistakes about Jesus and yet are restored to the Kingdom and become strong defenders of the faith.

A word against Christ may be spoken in ignorance (Saul) or in fear (Peter). One who has spoken against the Son of Man can be brought to repentance and faith, even if he was a blasphemer, as was Saul. One who has fallen away and publicly denied Christ can be brought back to repentant faith again, as was Peter. In both cases, such a person will be forgiven. Blasphemy against the Spirit is a conscious, informed rejection and reviling of the Spirit after the Spirit has provided ample testimony that Jesus is the Christ. As such, this sin is possible only where the Gospel has been present and the illuminating rays of the Spirit have been shining. It is saying that the divine Spirit, who has been upon John and Jesus—and who speaks today through all the Scriptures, revealing the forgiveness of sins provided by Jesus’ sacrificial death—is a liar, of the devil, the father of lies. But - the sin of blasphemy against the Holy Spirit in a way that does not preclude the possibility that the offender may be restored to repentance and faith during his earthly lifetime.
Just, A. A., Jr. (1997). Luke 9:51–24:53. St. Louis: Concordia Publishing House.

So, because God is gracious and merciful first, there is always room for repentance while we stand on this side of the veil. We, first of all, have no right to condemn another. That power belongs to God alone. Since that is the case, we pray for a reversal in their thinking and leave them in God’s hands. I’ve seen over and over how God will chase down even the blasphemer and hold out the gift of grace to those who have denied Him. No one is hopelessly lost until they have passed from this life. Blessed be the name of the Lord!