25And behold, a lawyer stood up to put him to the test, saying, “Teacher, what shall I do to inherit eternal life?” 26He said to him, “What is written in the Law? How do you read it?” 27And he answered, “You shall love the Lord your God with all your heart and with all your soul and with all your strength and with all your mind, and your neighbor as yourself.” 28And he said to him, “You have answered correctly; do this, and you will live.” 29But he, desiring to justify himself, said to Jesus, “And who is my neighbor?” 30Jesus replied, “A man was going down from Jerusalem to Jericho, and he fell among robbers, who stripped him and beat him and departed, leaving him half dead. 31Now by chance a priest was going down that road, and when he saw him he passed by on the other side. 32So likewise a Levite, when he came to the place and saw him, passed by on the other side. 33But a Samaritan, as he journeyed, came to where he was, and when he saw him, he had compassion. 34He went to him and bound up his wounds, pouring on oil and wine. Then he set him on his own animal and brought him to an inn and took care of him. 35And the next day he took out two denarii and gave them to the innkeeper, saying, ‘Take care of him, and whatever more you spend, I will repay you when I come back.’ 36Which of these three, do you think, proved to be a neighbor to the man who fell among the robbers?” 37He said, “The one who showed him mercy.” And Jesus said to him, “You go, and do likewise.”

Luke is the only Gospel writer who shares this story with his readers. Next to the parable of the Prodigal Son (which we will study in Luke 15) The Good Samaritan is probably one of the best known stories from the Gospels. I’ve always been somewhat frustrated with the teaching surrounding this story because it is generally lower to the concept of “be nice to one another” and it is so much greater than that simplistic view.

First of all, let’s understand that Jesus does not call this a parable. It may very well be a discussion of an actual incident. We don’t know if this is a parable or history. It really doesn’t change the final point, but Jesus may well have been discussing something everyone in the group would have already heard about. What we do know is that travel on the road from Jerusalem to Jericho was notoriously dangerous. For Jesus to use this example would not have stretched anyone’s imagination.

The lawyer who engages Jesus in this conversation has one clear motive; he is trying to self-justify his own life and actions. When speaking to the King of the Universe, that’s a bad idea. Jesus masterfully maneuvers this man into answering his own questions and pronouncing his own judgment and those judgments do not land in the lawyers favor. First of all, this lawyer is in error when he suggests that there is something he can do that will allow him to inherit eternal life. Inheritors don’t do a single thing to inherit. They are simply connected to the person who grants them the inheritance. A child or relative doesn’t earn a place in the will. They are granted it by the owner of the property. Jesus graciously doesn’t call the lawyer out on that point but instead asks him to declare his own answer for that question. And – he gets is right! The lawyer answers correctly when he quotes The Shema (“Hear, O Israel: The Lord our God, the Lord is one. You shall love the Lord your God with all your heart and with all your soul and with all your might.” Deuteronomy. 6:4–5). You will notice that he adds a little bit at the end though. He says “and love your neighbor as yourself.” His next question reveals his true heart, though when he asks “and who is my neighbor?” Now Jesus shares this famous illustration.

The details of this story are where the beauty lies. A man is traveling down a dangerous road. He is accosted by robbers, beaten, stripped, and left for dead. Because he is naked and unconscious his ethnicity is a complete mystery. And for Jesus that doesn’t matter. For the lawyer, the man's identity certainly does because that is at the core of his question about neighbors. Two men, a priest and then a Levite are given opportunity to lend aid and both pass by without doing so. (There is depth to that detail as well, but we will leave that for another day.) Then a Samaritan comes upon the injured man and immediately gives medical aid and transport to a place where more help can be gotten. The fact that it is a Samaritan who plays this part is shocking to every listener. These people were hated and avoided at all costs. He gives aid without thought to the cost to himself, which could have been considerable.

Is this simply a moralistic parable, told to a man who clearly doesn’t understand God’s grace or is it so much more than that? Of course – it is so much more.

One must read the Torah as the book of God’s gracious election and constitution of his people despite their sin, not as a “how to” book about earning merit before God. If one loses sight of the primacy of God’s grace in the Torah, then the focus shifts from the inheritance God gives to the deeds people do. An easy mistake for the modern interpreter would be to moralize the Good Samaritan story, so that it becomes an exhortation only to help our needy neighbors. But such an interpretation would turn this parable of Gospel into Law. The interpretation of the parable must be Christological. The question “Who is my neighbor?” (10:29) implies that there are some people who are not my neighbor. How, indeed, is a person to show mercy as (ὁμοίως; 10:37) the Samaritan did? The Gospel reveals that such doing flows only from having received God’s mercy. Legalists who cross-examine Jesus make no progress until they recognize that they are the man half dead and Jesus is the one who does mercy as neighbor. The lawyer says, “I will act to love my neighbor as myself; tell me who he is.” But Jesus answers, “You cannot act, for you are dead. You need someone to love you, show mercy to you, heal you, pay for you, give you lodging, revive you. I am the one you despise because I associate with sinners, but in fact I am the one who fulfills the Law, who embodies the Torah, and who brings God’s mercy. I am your neighbor and will give you the gifts of mercy, healing, life. As I live in you, you will have life and will do mercy—not motivated by laws and definitions, but animated by my love.”
Just, A. A., Jr. (1997). Luke 9:51–24:53 (p. 454). St. Louis: Concordia Publishing House. 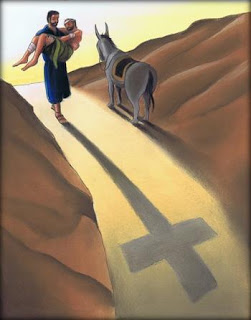 When we look at the Scriptures and realize they are always about Jesus, we begin to see them for their true beauty and grace. When we realize that we are unable to love our neighbor outside of the love of Jesus we have begun to scratch the surface of what it means to live in God’s Kingdom. Jesus is the only One who can act as the gracious giver of life and health. He is the One who picks up the damaged and wounded people that we are and carries us into His safety. This is complete shift away from a moralistic picture of us being nice to everyone to a deep realization that Jesus is our All in All.