Flee from Satan and Praise God 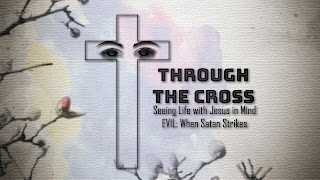 Do you remember the story of Jonah, the prophet who tried to run away from God’s calling? He is most famous for having been swallowed by a great fish. While he is in the belly of that fish, these are the words that He prays to the Lord! He actually recites some of Psalm 18! (See Jonah 2) At what he probably believed was the end of his life, Jonah too remembers God and takes the time to give Him praise.

The application here is pretty obvious. Every single one of us, no matter the circumstances of our lives, can look back and find innumerable reasons to praise God and thank Him for His hand in our lives. We serve a mighty God and there is never a time when we don’t owe Him praise and honor. The evil one would have us look at ourselves and our lives through his eyes. Then we will see sin, violence, and hopelessness. The Cross does away with that distorted vision. When we look at our own lives through the lens of the cross, we see that we are afforded grace and forgiveness. It doesn’t mean we are not sinners, for to say that would be a lie. But Jesus’ blood on that cross brings forgiveness and God no longer sees us as guilty, but instead, He calls us righteous. When we see ourselves as God see us, rather than the lies of Satan, our lives are lived with joy, hope, and a sense of purpose.