Meeting Up with Your Past


1And Jacob lifted up his eyes and looked, and behold, Esau was coming, and four hundred men with him. So he divided the children among Leah and Rachel and the two female servants.
2And he put the servants with their children in front, then Leah with her children, and Rachel and Joseph last of all.
3He himself went on before them, bowing himself to the ground seven times, until he came near to his brother.
4But Esau ran to meet him and embraced him and fell on his neck and kissed him, and they wept.
5And when Esau lifted up his eyes and saw the women and children, he said, “Who are these with you?” Jacob said, “The children whom God has graciously given your servant.”
6Then the servants drew near, they and their children, and bowed down.
7Leah likewise and her children drew near and bowed down. And last Joseph and Rachel drew near, and they bowed down.
8Esau said, “What do you mean by all this company that I met?” Jacob answered, “To find favor in the sight of my lord.”
9But Esau said, “I have enough, my brother; keep what you have for yourself.”
10Jacob said, “No, please, if I have found favor in your sight, then accept my present from my hand. For I have seen your face, which is like seeing the face of God, and you have accepted me.
11Please accept my blessing that is brought to you, because God has dealt graciously with me, and because I have enough.” Thus he urged him, and he took it.
12Then Esau said, “Let us journey on our way, and I will go ahead of you.”
13But Jacob said to him, “My lord knows that the children are frail, and that the nursing flocks and herds are a care to me. If they are driven hard for one day, all the flocks will die.
14Let my lord pass on ahead of his servant, and I will lead on slowly, at the pace of the livestock that are ahead of me and at the pace of the children, until I come to my lord in Seir.”
15So Esau said, “Let me leave with you some of the people who are with me.” But he said, “What need is there? Let me find favor in the sight of my lord.”
16So Esau returned that day on his way to Seir.
17But Jacob journeyed to Succoth, and built himself a house and made booths for his livestock. Therefore the name of the place is called Succoth.
18And Jacob came safely to the city of Shechem, which is in the land of Canaan, on his way from Paddan-aram, and he camped before the city.
19And from the sons of Hamor, Shechem’s father, he bought for a hundred pieces of money the piece of land on which he had pitched his tent.
20There he erected an altar and called it El-Elohe-Israel.

Jacob is about to meet up with his past. Over 20 years after deceiving Isaac and Esau for the blessing of the oldest son, Jacob wants to go home. That means facing up to lies he told Isaac and the sneaky way he dealt with Esau. Jacob is nervous and rightfully so. He has absolutely no idea what the reception will be like. He could be facing a slaughter. Now the Lord has informed him that all will be well. God’s protective hand is all over Jacob and his family. But instead of trusting that promise outright, Jacob takes elaborate measure to smooth over any hard feelings Esau may still hold. He sends numerous flocks and herds ahead of his family as gifts to sweeten the reunion. He then lines up his family member apparently in the order of importance (kinds of shameful) so that Rachel and Joseph will have the most protection. Then there is nothing to do but to move forward and face Esau. Much to everyone’s surprise and relief, Esau is gracious and welcoming. He is overjoyed to see Jacob again! What Jacob displays is joy and relief that this is not going be the death of his family; but he also is still very cautious and plays is rather cagey.

Esau has settled in the region south of The Salt Sea known as Seir. (See the map below. I have marked Shechem where Jacob settled with a red and yellow star. Seir is marked with a black and orange star.) Jacob tells Esau that he will join in where he has settled at a slower pace. But, then he doesn’t keep that promise. He stops miles (over 100) away from where Esau is living. While the reunion may have been a good experience, Jacob still doesn’t trust that Esau won’t take revenge. Seir (which means “hairy” – remember, Esau was a very hairy person), where Esau is obviously the tribal leader, is located almost 5,000 feet above sea level on red sandstone. (Esau also means “red”.) He’s made a good life for himself and is clearly very wealthy himself. God has blessed him as well as Jacob. While Jacob is learning how to trust God, it is a long slow lesson. He may be at peace with Esau, but he makes sure to stay clear. 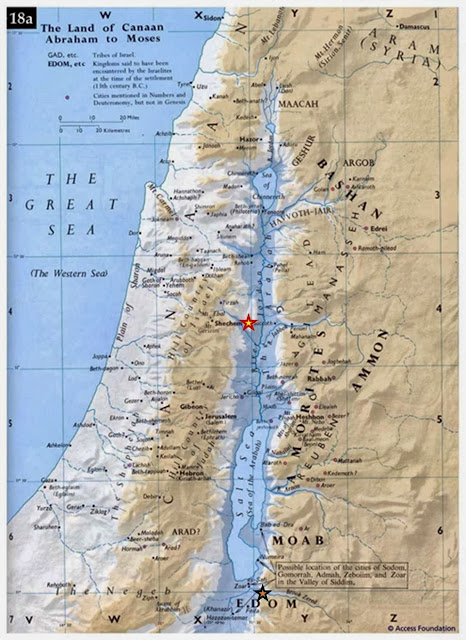 Our past is our past. You can't change it. There is no way for Jacob to go back and undo the deceit that he played out on his brother and father. There are several parts of my life where I would love to have a do-over. But that's not going to happen. Instead, I need to learn from those mistakes and try not to take them into my future. I also hold those past sins before the Lord and accept His forgiveness where I have sinned. That's hard for most of us, as we want to continue to be punished for those sins. But that is not God's way. He forgives (and forgets!) our sins. The past may be something to learn from, but is not meant to drag us down for the rest of our lives. That is not living in the freedom that God's grace give us. Learn from the past but don't live in the past. That can be tough but it can also be life altering.