1Jesus left the temple and was going away, when his disciples came to point out to him the buildings of the temple.
2But he answered them, “You see all these, do you not? Truly, I say to you, there will not be left here one stone upon another that will not be thrown down.”
3As he sat on the Mount of Olives, the disciples came to him privately, saying, “Tell us, when will these things be, and what will be the sign of your coming and of the end of the age?”

The most highly contested piece of property in the world is the Temple Mount in Jerusalem. It has been fought over for thousands of years and currently rests in the hands of the Muslims. If this were not the case I am certain that modern day Jews would have already erected another Temple on the sight. It is this piece of property that Jesus uses to initiate a conversation with His Disciple about the End Times. Jesus is just a couple of days from His suffering and death when this teaching takes place. He has finished with the Pharisees and now focuses His attention on the things He wants His Disciples to know before His death. Matthew 24 and 25 deal with those end times. These chapters are prophetic, instructive and meant for the church. He does not waste His time sharing this information with the Pharisees or even the crowds. This is for His followers.

Jesus uses a passing conversation about the Temple to illustrate another truth about His Kingdom. The Temple doesn’t matter anymore. Jesus is bringing radical change and one of those changes is going to concern the reverence for the Temple. How can you rely on something that is going to be completely and utterly destroyed? There are several passages in the Old Testament that prophesy the destruction of the Temple. (1 Kings 9:7-8, Daniel 9:27, and Jeremiah 26:17-18.)

Jeremiah 26:17-18
17 Some of the elders of the land stepped forward and said to the entire assembly of people,
18 “Micah of Moresheth prophesied in the days of Hezekiah king of Judah. He told all the people of Judah, ‘This is what the Lord Almighty says: “‘Zion will be plowed like a field, Jerusalem will become a heap of rubble, the temple hill a mound overgrown with thickets.’” 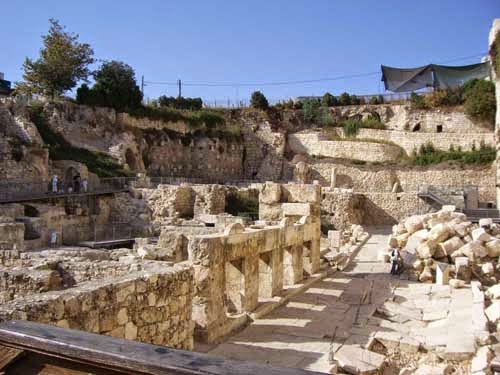 (The pictures are from the excavations of the Temple Mount that began back in the 1870's. The sight has been excavated in earnest since the 1960's.)

Jesus’ prophecy (as well as Daniel’s, Jeremiah’s, and the writer of Kings) comes to pass in 70ad when the Temple is burned to the ground by the Romans. The fire was so hot that the gold from the dome of the temple melted into the mortar that held the bricks together. When the building cooled, that mortar was chipped apart in order to retrieve the gold; thus not one stone was left upon another. The Temple was never rebuilt by the Jews after that event.

As Jesus teaches His disciples these things He isn’t trying to give them a pre-history lesson. He is helping them understand that the Temple is of no importance anymore. A new age has come and the End Times have begun. With the death of Jesus a whole new era is born. Just as the Old Testament believers looked for the coming of the Messiah, we now look for the return of that same Messiah. Both of us wait – but for the same thing; the Kingdom of God to be fulfilled. Waiting is always, always difficult. But we do not wait alone. Jesus is here with us in every moment waiting for the Father to send Him back to claim His victory for us. His Kingdom is here – but not yet.