16Then the Lord raised up judges, who saved them out of the hand of those who plundered them. 17Yet they did not listen to their judges, for they whored after other gods and bowed down to them. They soon turned aside from the way in which their fathers had walked, who had obeyed the commandments of the Lord, and they did not do so. 18Whenever the Lord raised up judges for them, the Lord was with the judge, and he saved them from the hand of their enemies all the days of the judge. For the Lord was moved to pity by their groaning because of those who afflicted and oppressed them. 19But whenever the judge died, they turned back and were more corrupt than their fathers, going after other gods, serving them and bowing down to them. They did not drop any of their practices or their stubborn ways.

Today we take up the book of Judges as we continue our trek through the Scriptures. As you can see, we didn’t start with chapter 1, but instead I want to do a bit of historical set up so that we are all on the same page. Judges is a fascinating study because the people are so real, the stories are so compelling and also pretty relatable. The passage above summarizes the entire book in just few short sentences. I have drawn a graphic for these verses that describes the cycle of the Judges. We need to study it because the Children of Israel lived out on a national level what we all experience in our Christian walk on a personal level. We have to hold that truth closely, lest we become tempted to tsk our tongues or wag our fingers in derision. Their story is our story. 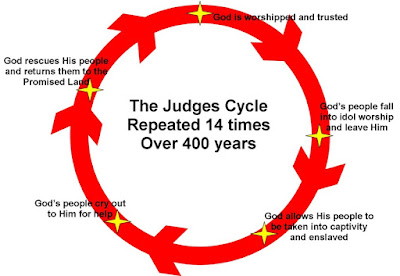 A Quick Overview
After the Children of Israel are rescued by God from slavery in Egypt, He leads them out into the wilderness to teach them about Himself and what it means to follow Him. The lesson ends up taking a long time. The walk from Egypt to Israel should have taken about 3 weeks. God takes them to Mt. Sinai first, adding several months to the experience, but they were heading toward Israel roughly 1 year after leaving Egypt. Due to some severe arrogance on the part of the people and some outright disobedience, God decides that they are not going to be allowed to enter The Promised Land for 40 more years. He relegates them to wandering the desert until the disobedient generation dies off. At the end of those 40 years, Moses dies and Joshua takes his place as leader. The next generation of Hebrews is now ready to enter The Promised Land. God takes them over the Jordan River and into Israel through Jericho, where they experience God’s divine providence as He hands them the land. After Joshua successfully helps them settle the land God has given them, he dies and passes the leadership of the people into the hands of “The Judges”. That is where we pick up the story with Judges 1:1. Throughout the next 400 years, the Hebrews live in a cycle of faithfulness, followed by apostasy, judgement, slavery, and rescue. This cycle is repeated 14 times. When we look at the mega-narrative, it seems a little ridiculous. But – we need to turn that gaze inward and I suspect that all of us have to admit, we haven’t learned much since then.

The Christian life has been described by some as an ever upward voyage of self-improvement. The big theological view of this view is called “Anthropocentric Model of Growth in Sanctification. (I know – you hope to never have see those words strung out in that order again.) This view looks like this:
In this model, we are ever improving and becoming “better”. This is, as the title indicates, a view of yourself that centers totally around you. This is “anthropocentric”. In reality, because of original (and ongoing) sin, are lives are not that upward bound. If we are to see ourselves as the Bible describes us, our life direction looks more like this: (The Biblical Model of Growth in Sanctification)
Because of sin, we are not ever going to “arrive” at sanctified. We too are going to spend our lives repeating the same errors as our Hebrew forefathers. Sin is an ever present anchor that will drag us down whenever given the opportunity. So, when we look at the vicious cycle of idolatry the Hebrews experienced, we need not shake our heads in derision. No, instead we need to look at ourselves and see our raging need for a Savior. God is faithful even when we are not and He has provided that Savior in Jesus Christ. Because of His blood, even though I know that my life often dips down into those sinful places, He has forgiven my sin and restored me to His side. When my life dips down and touches that line again, I am met by His grace. There is no self-improvement here, only God’s grace.